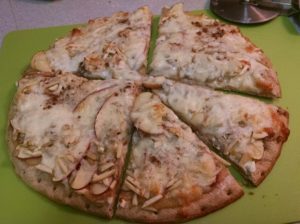 Prep your crust as directed on the package or in your recipe. Again, I would recommend a short pre-cook for homemade crusts.

I decided to try cream cheese on this one, so I put little dabs of it all over and spread them out a little. I’m not sure it made much difference in the end.

Spread applesauce on the crust. Sprinkle with cinnamon, and don’t be stingy. Add the apple slices in a circular pattern. It looks cool. 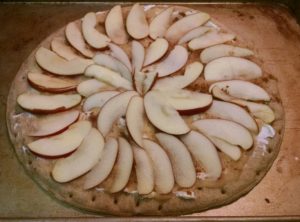 Next comes the sunflower seeds and almonds. 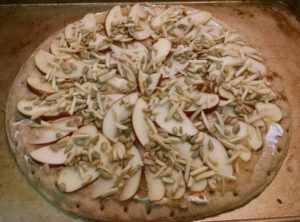 Cover the whole thing with the cheese.

Bake at 400° or so until the cheese starts getting golden brown on the highest points. It’s so good.

This entry was posted in Food, Uncategorized and tagged Food. Bookmark the permalink.